The Lucky Ones by Rachel Cusk 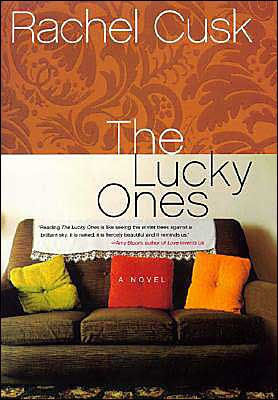 I feel a bit slapped around by this novel, published in 2003, the year after Cusk's bombshell of a memoir about motherhood, A Life’s Work, had such a mixed reception. Not only do her chapters read as individual, difficult-to-reconcile stories, the sentiment is painful to read. She is not funny: if one laughs, she remarked in an interview, the power is lost. Women and men living together in anything but married bliss: it’s instructive, relatable, hardly comforting.

The angles from which Cusk approaches these stories are not immediately clarifying. I wondered why we were reading about couples or their friends. The view of an older mother whose daughter is living a life outside of the mother’s experience seemed false for much of the chapter, as though she did not capture the older woman’s essence and mechanism: that which makes her tick. Eventually we see something, but we do not feel warm to this armored woman, battling her demons.

Who says a novel has to unroll its delights promiscuously for anyone to partake? The novel is a serious attempt to take on issues of critical meaning to people involved in relationships, perhaps even same-sex relationships, because the dynamic is often the same. After all, most people are still buying a “pig in a poke” when they marry in the sense they often do not know well the person with whom they intend live, and in any case, the relationship changes with the addition of children to the equation.

Cusk of course captures the despair of married women everywhere trying to fit their personalities, skills, and unique abilities into what can feel like the straightjacket of marriage and childcare. But we must now, in this time of #MeToo, acknowledge the point of view of the husband who, no matter what kind of man he was taught to be, also finds himself aghast at the weight of responsibility suddenly thrust upon him when he achieves his majority and marries.

But Cusk wrote this in the olden days: in something like fifteen years we are finally talking broadly, openly, and seriously about the rights of women in the workplace but also about the definition of masculinity, male privilege, and patriarchy. All this openness could be shut down tomorrow, as many have predicted the backlash will come, but the very things that Cusk is talking about so clearly is exactly what we should be internalizing in order to emerge healthy.

Transitions between chapters can be clunky and uncomfortable in direction, but Cusk at her worst is still better than most at their best. The first chapter is set in a women’s prison, and had some startling overlap with Rachel Kushner’s Booker-shortlisted novel this year, The Mars Room, a story of inattentive public defenders and tragic consequences. The very next chapter dropped us in the middle of a winter ski vacation in Switzerland for young professionals just beginning to construct and/or deconstruct their lives.

She works her themes, the moment young women, old women, rich women, poor women, talented women, and educated women clearly see their social predicament. The male partners of these women are not as finely drawn. The character of Martin in “The Way You Do It” could almost be a precursor for her narrator occupying negative space in the Outline trilogy, though she’d not even conceived of the notion then. Victor, the husband of the red-haired Serena, dies of a wasting disease. Colin refuses to speak, having succumbed to an affair, and Mr. Daley complains impotently late in life that his wife had “stolen his soul.”

But Vanessa in “Matters of Life and Death” says her desire for self- expression was thwarted, not by her actual circumstances, but by her fear of what might be. This theme recurs in later novels—a painter cannot paint nor a writer write for the distraction of everyday. The “enemy was not her husband; it was the capacity in herself, of which she was aware, for finding her husband unsatisfactory.”

Also recurring in other novels is Cusk’s tendency to have someone look upon the physical characteristics of a house as proof of something in the character of its inhabitants. She may be pointing to a common tendency in many of us to judge people by the splendor—or not—of their homes. Unfortunately, one cannot simply buy a life, only a lifestyle.

There is a party in this novel, which by now should strike readers with dread at what is to come. Suffice it to say, a great deal of blood is spilled and the circumstances are unclear: there had been an argument shortly before. The outcome is as unsettling as the months preceding the event.

Even in the novels that received less attention and critical praise, Cusk is working hard at expression. One I particularly liked was

“Colin digested Vanessa’s remark with the expression of a dog realising that what he had thought was a stick was in fact a bone.”

Cusk moves on to revisit and refine these themes in her later work but we can see these in-between books are critical parts of her oeuvre, the building blocks for what is to come.

Below please find reviews of Cusk’s other work.