The Queen of Patpong by Timothy Hallinan

We had a heat wave in the Northeast U.S. this week, but I didn’t mind—I felt completely simpatico with the characters in Timothy Hallinan’s new Poke Rafferty thriller set in Thailand. Hallinan did such a good job getting us inside his characters and their lives, I felt as though I’d just spent a week in Southeast Asia. In this latest offering, Hallinan describes how one comes to live the life of a bar girl in Patpong, Bangkok. While undoubtedly fiction, it sounded plausible enough to describe the experiences of many country girls sold to the meat markets of the city, making their way the best they can.

Hallinan has the good sense to be matter-of-fact about life in Thailand. He is no apologist for a whole country or way of life, but he has a depth of sympathy for the reality of people’s lives and a deep and abiding love for people of honor, wherever he finds them. And he describes Thailand with the splash and fizz it deserves—one can smell the markets and hear the traffic. In The Queen of Patpong, Hallinan succeeds on many levels: Poke Rafferty daughter is acting in a school play, and it is described with such skill, one feels one has just read a particularly good newspaper review. One wants to race right out and book a ticket. The central mystery of the novel circles and mirrors the play ingeniously, and the play itself is central to a final resolution of the mystery. Hallinan deserves very high marks for this wonderful warm and friendly novel, and for sharing his imagination and his life with us.

I asked a friend once what was the draw of the TV serial Sex in the City. She replied that, for her, the strength and depth of the female friendships was the draw. She knew it was fiction, but it presented such a wonderful fiction that she watched it whenever she could. Hallinan has a little of that specialness in his books. There is such friendliness, such sincere human-to-human contact, one wants to be in that place. Kudos, Hallinan.

Posted by Trish at 7:57 AM No comments: Links to this post

The Ultimate Weapon is No Weapon by Shannon D. Beebe and Mary Kaldor

One mustn’t feel side-swiped by this discussion of a change in focus of the traditional military. In our hearts, we’ve known it for some time, that our military with it’s focus on heavy machinery and fighter-jets we can’t use (the F-22)—that this magnificent fighting force composed of brash young kids listening to i-pods and practicing on video games--wasn’t really “winning” the wars in Iraq, and in Afghanistan. We’ve seen also that our National Guard is increasingly deployed for disaster relief, construction and reconstruction, rather than for fighting. After the Haiti earthquake, we sent in troops—and they had to keep peace. It’s odd, that we spend so much time teaching our fresh-faced young men to kill and then direct them to save instead. It appears to be time to rethink this—rethink the plan we have for our military, the money we spend on it, the demands we expect to be placed on it.

I actually agree with the Kaldor thesis that we should fundamentally rethink our strategic balance of weapons. I believe it is very unlikely state-based government is going to drop a nuclear bomb on anyone, except possibly one as unhinged as the present North Korean government. Even then, it is likely cooler minds in the chain of command would stop that atrocity before it became reality. Kaldor argues that we provoke the deadly venom of mad-states by not having deniability when it comes to nuclear. In the end, I see no reason to preserve the nuclear option. Even in retaliation, it is unlikely a state contemplating using a nuclear weapon could present a reasonable moral argument for doing so.

I agree with the authors Beebe and Kaldor that non-state insurgent groups and weather are going to be the sources of our greatest security challenges in the coming years, and that perhaps we should think about creating a security force, a military, with a fundamentally different focus: defensive rather than offensive, stabilizing rather than destabilizing, sustaining a different kind of troop. Instead of the “militarization of diplomacy” where DOD personnel assume public diplomacy and assistance responsibilities that civilian agencies do not have the trained staff to fill, perhaps we should think about the ‘diplomization’ of the military, where a civilian-led operation has a policing arm separate from a military arm separate from a construction arm. Different roles, different teams, same mission?

Beebe, a Lieutenant Colonel in the U.S. Army, talks about his work looking at what “security” means to people in different countries in Africa, and comes to the conclusion that their concerns are daily-living immediacies, not long-term possibilities. Mary Kaldor is the Director of the Centre for the Study of Global Governance at the London School of Economics and Political Science. Finally, the two authors directly address the role of energy in our on-going concerns: “Energy security is a global problem linked to climate change and so, instead of geopolitical competition, there needs to be a global strategy that combines diversification, transparency, and human security.” Both authors recognize they will be criticized for this approach (for being too optimistic), but our children may surprise us with their wisdom, pragmatism, and innovation. This is a short, clear, thoughtful framing of the debate.
Posted by Trish at 12:13 PM No comments: Links to this post

The Prince of the Marshes by Rory Stewart 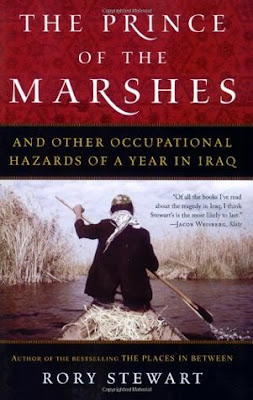 I was unprepared for this book. It surprised me utterly. I didn't know what to expect, given the author's previous book, which was his walk through Afghanistan, called The Places in Between. To say I liked that earlier book does not quite describe my reaction--I was bowled over. I gave the book as a gift to several people and looked to see what else he'd done. I bought this one and put it aside, thinking it would be nice to read someday. When I stumbled upon his participation in some interviews in which he claimed his world view changed after "his experience in Iraq," I decided I had to read this RIGHT NOW. As with The Places In Between, I listened to the audiofile and read the hard copy to clarify and review.

Stewart had been at home in Scotland planting trees after his Afghan trek when the US entered Iraq. He was an ex-infantryman and ex-foreign service officer and was well connected enough to be somewhat known. He was still young: late 20s, early 30s. He wrote to Baghdad and the Powers That Be and offered his services helping to set up the new Iraqi government. He got no response. He took a taxi from Jordan to Baghdad and offered again. His offer was accepted, and he was sent to a province in the south--ostensibly to work as an assistant and with several others on reconstruction projects. No one else showed up for awhile, so he managed on his own.

He describes situations, individuals, conditions with a poet's eye and a truly sublime sense of the ridiculous. Even the photograghs he included are choice. In describing the clash of cultures that came with the occupation, something emerged that seems as obvious as 2000 years of human history: that only Iraqis can manage their country. We can help if they ask for our help, but the issues are so ancient, if you will, and culturally-specific, that really what we must do is avoid situations where we are fighting and occupying a foreign country with the idea that we can install a government that works.

Some books turn on a light and illuminate dark corners where confusion reigns. This book did that for me, on a human scale and in a humorous way. It is one man's experience in one province, but it enlightens and enlivens all other discussions of these issues because of its particulars. I did manage to find a discussion by Stewart and radio talk show host Christopher Lydon that likewise set me to musing for long hours. In this podcast, Stewart talks of his two books and his experiences in Iraq and Afghanistan, and what this means for foreign involvement in Islamic states. It is a terribly important debate for how we move ahead in the world, and it has made me want to see more of this very human, deeply interested and interesting individual.


Posted by Trish at 10:40 AM No comments: Links to this post