The Bridge by David Remnick 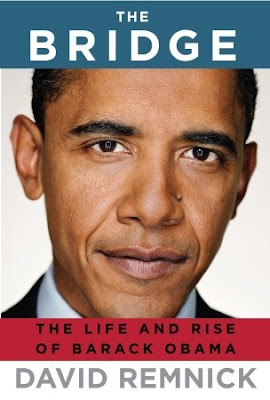 This dense and detailed look at a moment in history when Barack Obama began his run for the White House gives the reader the sense of a blind man running his hands over an elephant, or of Galileo gazing at the stars. The detail just makes one jealous to know those things we are not reading about--what was he thinking, not just what he was saying. One wants the man himself, not just the story of him.

In the end, every book about this period is bound to be a disappointment in itself. It cannot capture the utter impossibility of the moment--the day by day disbelief of hearing Obama is still in the race and gaining, rather than losing, adherents. Of Obama facing challenges (Reverend Wright) greater than those that had brought down more conventional candidates (Kerry's Swift boat controversy), and emerging even larger than before. It does not tell us, finally, how this happened, though it attempts to explain fragments of the whole.

But among books of the period, this will rank among the best. Remick's calm amidst the forest of details and clear, thoughtful delivery make him a companionable guide. He is not so casual as to make one doubt his sources, but he does not flaunt his access. This must be one of the most readable tomes on a time when America suprised everyone--even Americans.

The book is a huge bestseller , so whatever I think will have to be taken in that context. It is immediately accessible, and has two enticing threads: one of a blond Jewish child from Paris during the German occupation of France, and the other of a forty-something American journalist married to a Frenchman and living in Paris. We can empathize with the one while envying the other. I was not suprised to learn the author is French, as the voice is clearly 'other' than American, and very interesting for that. But not even halfway through the story begins to show cracks: a 10-year-old girl proposes to bribe a train conductor with cash, and the journalist shows a naïveté and an insensitivity that makes us less interested in her search. I only skimmed the last half of the book, having lost faith with the narrator. It is possible the book could have been a very tight and taut short story, but it felt much too long for a novel.
Posted by Trish at 10:02 AM No comments: