Memorial: A Version of Homer's Iliad by Alice Oswald 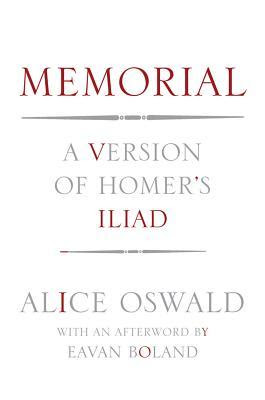 The poetry of Alice Oswald is preternatural…preternaturally gorgeous, preternaturally immediate and relevant and precise. We want to sink into that language and be in that bright place—perhaps not to live (among the flashing swords), but to die there, amongst one’s brethren, with poetry read and songs sung in one’s honor.

Everything about this book is beautiful, and new and bright and contemporary. The Afterword written by Eavan Boland answers all the questions one has while reading this wholly original poem, this ‘oral cemetery’ memorializing the men who fought the Trojan War. I am tempted to suggest you read the Afterword first, but no, of course you must proceed directly to the glory that is the language exploring the feel of the Iliad, a story with so many deaths, so many deaths of young and old and brave and foolish and handsome men.

Oswald gives the names she memorializes at the beginning of her work and then proceeds to tell in startlingly immediate language, how exactly they met their end, or some tiny biographical note that makes them, contrarily, come alive.

The ancient critics of the Iliad praised its ‘enargeia,’ or ‘bright unbearable reality.’ And that is exactly how we perceive the language Oswald gives us: all the bright young brave men, all dead.

ECHEPOLUS a perfect fighter
Always ahead of his men
Known for his cold seed-like concentration
Moving out and out among the spears
Died at the hands of Antilochus
You can see the hole in the helmet just under the ridge
Where the point of the blade passed through
And stuck in his forehead
Letting the darkness leak down over his eyes.

Oswald strips the narrative from the oral tradition and gives us a kind of lament poetry aimed at translucence rather than translation. She wants to help us see through to what Homer was looking at. But the context is remarkably unnecessary. It is about young men at war. We understand immediately, sadly.

The poetry of war. Breathtaking. Heartbreaking.