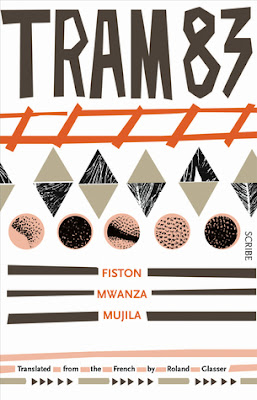 If exuberance were key to great literature, this book would rank. This manic deluge takes the Western notion of a novel and puts it on a train out of town. One day it may circle back, or we may catch up with it, but we will all be changed by the journey. This is literature self-consciously desperate to join the club but having no earthly way to reconcile a reality crazier than fiction.

The Democratic Republic of Congo has been sadly underrepresented when it comes to literature, but not because the outside world is not interested. What we see is how complicated it all is, how slim the chances are that anyone would be able to thrash through the thicket that is daily life in the Congo, and manage to capture the moment on paper. Whoever manages it will have a different kind of voice, with a different center of balance.

This is train literature, the protagonist Lucien exclaims,

“locomotive literature….my writing displays similarities with the railroads that depart from the station that is essentially an unfinished metal structure, gutted by artillery, train tracks and locomotives that call to mind the railroad built by Stanley….Anyway, I’ve had a weakness for railroads for a while now. I sought man, I found train. (Laughter)”

There is something to the random voices of the bar girls (“Do you have the time?”), the circular nature of daily routine, the powering through despite the distractions…a more unlikely place to find a serious writer of political plays can hardly be found. And yet, Lucien runs into a publisher in the bar who, over time, adds to the general hilarity and nonsense by asking Lucien for short pieces on random subjects unrelated to Lucien’s opus, a political stage-tale with the title: The Africa of Possibility: Lumumba, the Fall of an Angel, or the Pestle-Mortar Years.

But the dissolution is not restricted to the government, as Lucien’s description of Tram 83 includes the panty-less baby-chicks, the single-mamas, the ageless-women, the wild, endless search for the conflict minerals of gold, diamonds, cobalt…”this dung elevated to a raw material,” the search continuing even under the floor of one’s own shack. Lust for the vast, unrivaled mineral wealth of the country affects everyone, but the return on those minerals is nowhere to be seen except in the nighttime exchanges in Tram 83 where everything is for sale. “Do you have the time?” Heart of Darkness, indeed.

The loco-motive nature of the novel at first runs us over. As we grab hold, it drags us behind it. It is only when we are able to climb aboard, for me after the second reading…the second drink, as it were….that the previously unimagined riches of this debut novel begin to reveal themselves. The translator is to be commended for keeping pace and not succumbing to despair or overload. The Democratic Republic of Congo. We’ve heard the stories; we've read the history. Now see the literature.