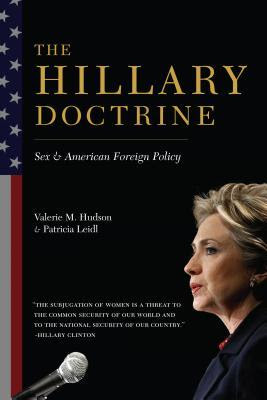 Recently published by Columbia University Press, this book illuminates the underpinnings of what has become known as the Hillary Doctrine, or the stated principle that “the subjugation of women is a direct threat to the security of the United States.” Hillary Clinton began speaking about this idea as First Lady Clinton in 1995 in Beijing, and made it a pillar of U.S. foreign policy during her tenure as Secretary of State. The authors ask the question whether or not the assumptions behind Clinton’s statement are demonstrably true, and then whether or not it should be a tenet of U.S. foreign policy. Hudson is an academic and Leidl is a journalist and lecturer, both interested in the connection between sex ratios and violence.

In Part Two, after they have discussed the establishment of a pillar of foreign policy focused on human rights (“women’s rights are human rights”), the authors ask “Is there in fact a direct connection between the relative security or insecurity of women in a given society and that society’s level of stability, security and resilience?” A short interview on BBC radio by the authors gives readers an overview of their work. Part Three evaluates efforts by the U.S. government to implement that policy during Clinton’s term as Secretary of State.

The authors cite studies making the case for the notion that empowered women in national and local government, in the business community, and in society in general have a felicitous effect upon education, health, community income and political outcomes, while also exerting a moderating effect on the use of military options in conflict. They examine ways in which the subjugation of women not only makes them less safe, it deprives them of the opportunity contribute to their security.

Studies conducted now in countries where females are treated differently from males growing up may show a difference in how the two sexes respond to threats of violence, and conclusions may show females have dampening effect on militarism. The question remains whether, once females and males are treated similarly growing up, the dampening effect on militarism will still manifest. Although we do not have a perfect case study in the United States because women in power now have had to fight for equal rights, the United States does now have powerful women in political leadership. Among the examples of their effect upon militarism is arguably one of the worst foreign policy decisions in recent history:

"…it was reportedly a coalition among Hillary Clinton, Susan Rice, and Samantha Power that swayed the president toward military action in support of the Responsibility to Protect operation in Libya in 2011, even though Obama’s secretary of defense and his vice president opposed the intervention."

I find the notion of "bombing to protect" a troubling one. Smart weapons are not all that smart, and can cause enormous collateral damages resulting in unexpected outcomes, witness Libya today. Furthermore, the decision to intervene in domestic conflict assumes a consensus on what outcomes are "right." Intervention could be perceived as imperialist, hegemonic, or at least, were it not so destructive, as bullying.

We have the case of Iraq to show us that imposition of "right" by another country does not have a long-lived outcome compared to what might be accomplished by internal dissent and political reformation by domestic agents of change. The rights of women is seen as necessary component of a push towards democratic change, but imposition of a democracy in a former dictatorship may be problematic unless the West involves itself to the point of occupation. At the same time, the authors point out that Saudi Arabia got not even a mention during the time of "human rights" promotion during Clinton's term, presumably because of other U.S. interests in that country. Perhaps the pace of change in some parts of the world has made the "haves" impatient for the "have-nots" to catch up. The "haves" can help by directional support for the "right" side, but it should be consistent. Do the "haves" need to intervene to show support for change?

R2P might be seen to give the U.S. some international support for interventions in support of women in light of the "women’s rights are human rights" declaration. While one wouldn’t expect, nor would one want, the U.S. to intervene militarily in every case around the world of violence against women, Clinton has shown her willingness to use military interventions by supporting U.S. involvement in the Iraq and Afghanistan conflicts. The authors quote Mallika Dutt of Breakthough, a human rights organization, as saying "It is ironic…I don’t think [Clinton] would have been able to get much traction on women’s issues if she hadn’t been seen as being tough in these other spaces."

Clinton is well aware of how long it takes to change attitudes at home and abroad. With the Hillary Doctrine, she began a shift of resources and focus during her term as secretary of state, with the intent to begin the process, sometimes bruising and firm when encountering resistance, just like her male colleagues. In a chapter entitled “The Good, The Bad, and the Ugly,” we are treated to the implementation of the Hillary Doctrine under the aegis of USAID and other agencies. The chapter is a riveting but disappointing catalog of the ways policy directives get lost in the bureaucracy, illustrating the difficulty of steering a large ship of state.

The final chapter, “The Future of the Hillary Doctrine,” makes the point that "As long as men wield the preponderance of economic, political, and military power, men’s voices and men’s priorities will inevitably be privileged." In the few short years since Clinton resigned as secretary of state, observers noted a slip in focus and priority from women’s issues at the highest level of government but, paradoxically perhaps, not in the bureaucracy. The State Department and USAID continued the inexorable churn of policy directives through the change in management and no longer see the focus as confusing or controversial. Attitudes and attention are changing.

Proportional numbers of women in power may eventually have a stabilizing effect on national and international governance. Change takes attention and time, and a strong advocate, perhaps like Clinton. When the authors propose something more--R2PW (Responsibility to Protect Women)--I find myself backing away from support until we have more women in governance. I do not feel confident that military action won’t be the first tool chosen to shoulder aside nascent indigenous attempts to develop rights among women in trouble areas, and we know such rights cannot be imposed by military muscle.