An Innocent Millionaire by Stephen Vizinczey 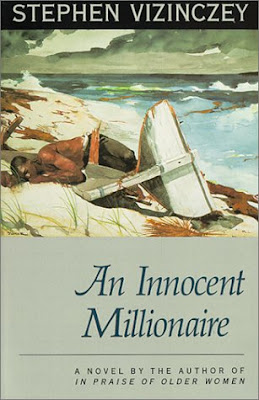 I was attracted to Vizinczey by the title of his first book In Praise of Older Women but thought the title of this book appropriate to the world we now live in. An Innocent… is a big comic novel, first published in the early 1980s, and has more stomach-dropping twists and turns than the big ride at the carnival. There is good in the world ”but evil is stronger,” says a lawyer late in the action. Whether or not the author agrees is still a question, for the open warfare between good and evil continue to the very last page.

Businessmen and lawyers take most of the heat in this novel, which makes it seem almost quaint considering what Americans have learned about the financial field since then. While businessmen poison their neighbors and lawyers manage to fleece clients and double-cross their peers, it is still puppy-doo compared with what realtors and investment bankers have managed to accomplish in the new century. We learned to be critical of big business and lawyers, but were blindsided by our bankers.

But of the writing: there is so much here of human nature and human foible that it is funny at the same time it is painful. Big sections are devoted to massive injustices in the world, but they never distract one from the hand-to-hand combat of interpersonal relations that comprise most of the story. Thanks to the author’s foreshadowing, one sees disasters before they arrive, but one never anticipates the next little bit the author throws at one after that. I can’t really tell you much about this book because even a sketch gives much away, but it begins with a young man seeking sunken treasure, surely a delicious thought…