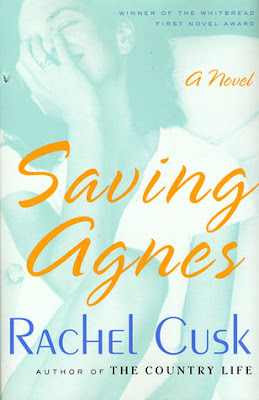 This first novel by Cusk won the Whitbread Award for First Novel in 1993 and it seems worthy of that distinction. It is less tentative than we would have reason to expect though it depicts a just-new woman carrying a load of insecurities while trying to navigate a large city.

Ultimately Agnes manages to find her way outside the maze inside her own head, recognize the privilege of her upbringing, and to feel something for the difficulties of others, but it is a tough couple hundred pages until she gets there. It is not so much funny as pathetic, and that is because we recognize something of ourselves (and perhaps our children) in her.

I wish I’d had more time to concentrate on this novel, though the reason l didn’t is that I always found time to do something besides read it. Reading about Agnes was uncomfortable. Agnes (what a name!) was so unsure of herself it was painful. I do remember those years but do not miss them. It is a miracle we make it through, though Cusk puts in a couple reminders that some folks nearly don’t, and many don’t come through without damage.

We see the promise of Cusk in this novel in that her seemingly lightweight protagonist manages to discern the outlines of consequential existential questions— about the purpose of life— and this doesn’t change in her later work. Cusk is a heat-seeking missile for “the heart of the matter” and that is why readers eagerly seek out the next installment in how she describes what she has discovered.

Ultimately I was reading this novel at this time is for completionist reasons, but it also strangely dovetailed a major life moment. My oldest brother who’d had a major influence on my life trajectory died suddenly. Preparing his memorial service involved creating a short slideshow—he was a photographer and oceanographer, among other descriptors. He’d taken pictures of me beginning my travels overseas alone at the age of Cusk’s Agnes. Reading of Agnes’ mental circularities, uncertainties, and anxieties reminded me what I’d ditched as soon as I could.

I am having a look at all Cusk’s books to see how she got from here to her adaptation of Medea and the Outline trilogy. I have one novel left, The Temporary, before I will need to circle back to read her later work again. I admire her writing and think her work resonates, particularly for white women of a certain level of wealth, education, and age. That is not to say her later work doesn’t speak to universal experience—I think it does—but I wonder if the humor translates as well. She is easily in the ranks of America’s now dead male writers, Updike and Roth, whose work was claimed by a generation of white men of a certain level of wealth and education.

This early novel feels dated now: it was written twenty-five years ago. Reading about Agnes’s travails reminded me that young women today likely have different experiences with first sex, with boyfriends, girlfriends, even parents. Our relationships have been changed by cell phones and connectedness, and at the risk of seeming out of touch, I venture that the rate of change truly has speeded up. Perhaps everything we really need to learn can, like Dorothy in The Wizard of Oz, be found in our own backyards after all. There is something to be said for getting a firm foundation in a more limited environment before being hit with the world, but perhaps those faced with choice early are better at navigating it. Whatever the case, we’re not in Kansas anymore.

Below please find reviews of Cusk’s other work.