The Thicket by Joe R. Lansdale 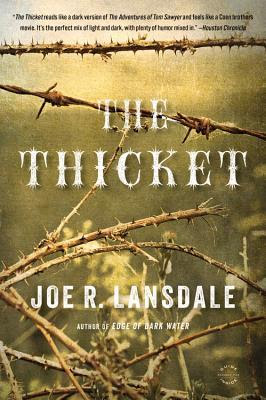 Joe Lansdale is not an old man and yet he has published at least 45 novels and 30 short story collections, sometimes two or three books a year (!), as in 2012, according to Wikipedia. Some of these may be reprints of old favorites because it is difficult to imagine someone publishing quality fiction at that rate. But quality fiction is what I would call this 2013 novel. A young boy, his sister, and his grandad traveling north to Kansas from East Texas in the early part of the twentieth century find themselves at the mercy of a band of marauding cut-throats.

In what may be a signature trait of this author, a reader enjoys the company of what we call 'unusual characters' who represent the kind of resilience and humanity once assigned to heroes in Greek mythology. Race is an abiding subject of discussion in Lansdale’s novels and nearly every novel has at least one vital character who speaks out eloquently on race relations in America.

Eustace is a principled black man of nearly unequaled trustworthiness and equanimity—except when he drinks: then he cannot be trusted by man nor beast. This novel also ruminates on whoredom (Jimmie Sue) and the inequities of perception that result from other physical differences, like dwarfism (Shorty). There is a wild hog, too, who is accepted for what he is and how he is. Hog is a valued member of a select community.

Despite the graphic sense of brutality that reigned in the West during the period depicted in this novel, the most enduring sentiment in Lansdale’s novel is that of humor: the author counters each act of senseless brutality by heaping abuse on the perpetrator through description or through the mouths of other characters.

Some characters muse on the nature of man and the “why” of extreme violence. There is no answer to the “why,” Lansdale concludes. It makes no sense no how. Good may triumph over evil, but it ain’t always a sure thing. One has to puzzle out for oneself a sense of what is good and hold onto one’s own values to make the world into what we wish to see.

"Fatty was, in his own way, as dangerous as any Comanche. He was just mean as a snake for no other reason than it pleased him; all those men who had been with were like that, and I wondered then what made a man that way. I didn’t come up with any answers."

I listened to the Hachette Audio production of this novel, beautifully narrated by Will Collier, and highly recommend this method of consumption. Collier makes each individual unique, and Shorty’s accent and manner of speaking elevates his thinking to philosophy. One becomes so attached to the characters in this book we forgive them most of their more egregious transgressions and miss them when we do not see them for a couple of pages. I was terrified Eustace 'bought the farm' in the last shoot-out, and waited anxiously for word of him, that drunken cuss.
He did get the farm, after all, where he struck oil just as autos were becoming the norm.


There are few folks who can pull off a western these days, and the beauty of Lansdale’s writing is that he doesn’t idealize the turn-of-the-twentieth-century life in the west. It was a lawless, racist, sexist place where one was often at the mercy of men stronger and crueler. But when good people band together, they can often accomplish much, and create the kind of environment in which they want to live. It means a great deal to me that Lansdale reflects us back at ourselves, and shows us possible paths out of the thicket.

Lansdale’s books have spawned an industry: several movies and TV series, as well as graphic novels, have come out of his stories. A new publishing company, Pandi Press, is involved in republishing earlier Lansdale work now out of print. Among the books Lansdale is best known for are the Hap and Leonard series of nine books, featuring a white blue collar war protestor and a gay black Vietnam vet. The Sundance Channel premiered a series based on these books and find them if you can: the series, the actors (e.g., James Purefoy, Michael Kenneth Williams, Evan Gamble), and the writing are all terrific.

Lansdale's stand-alone novel called The Bottoms has received the most critical praise to date, and is currently in film production. Lansdale also writes horror and has a cult following in this genre. Enjoy this author in any of your favorite genres, but don’t miss him.