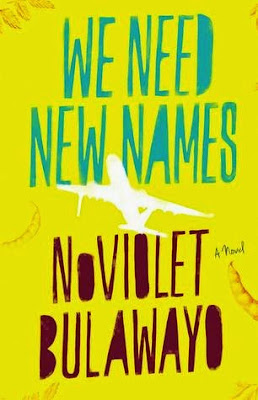 NoViolet Bulawayo’s debut novel has just been added to the long list for the 2013 Booker Prize. A short story of hers called “Hitting Budapest” won the 2011 Caine Prize for African Literature and became the first of several astounding chapters in …New Names. The work feels brave and completely fresh--raw even. The perspective, voice, and language held me spellbound.

On Bulawyao’s website is a quote from Chinua Achebe:

“Let no one be fooled by the fact that we may write in English, for we intend to do unheard of things with it.”

It seems an appropriate quote for someone who has taken such liberties with language and point of view.

Narration begins in the voice of ten-year-old Darling, whose father is away, whose school is closed, whose friends (Bastard, Godknows, Sbho, Stina, and Chipo) scream-sing with her as they run riot through the neighborhoods in search of guavas to steal. Bulawayo’s Darling tells us what they find besides guavas, and it is her words, reactions, and attention that feels real and tells us what we have always wondered: how does a child grow up in a world like Mugabe’s Zimbabwe? What does the world look like and from where do these children acquire knowledge of concepts like “justice,” “fairness,” and “freedom”? Do these concepts include any notion of personal responsibility?

Very quickly in this novel one senses the danger in child’s play. The world is life-threatening, and the children know it. Their play, their home-life, their worship--it all has an edge that makes them brave and vulnerable at the same time. They rely on one another. The chapter “We Need New Names” was another breathtaking high-wire act that left my heart in my mouth. From this point I did not relax my guard with Bulawayo’s book in my hands. It felt explosive.

In “Shhh,” Darling hides the fact that her father has come home and is very ill. When her friends find out, they push their way into Darling’s shack, immediately intuiting that Darling’s father is dying of AIDS. Even Darling hadn’t grasped that—she was angry with her father for having left, and angrier still that he came home with a sickness. But the children face the man lying on the bed and talk openly about death and heaven and then they begin to sing:

"When Godknows starts singing Jobho, Sbho joins in and we listen to them sing it for a while and then we’re all scratching our bodies and singing it because Jobho is a song that leaves you with no choice but to scratch your body the way that sick man Job did in the Bible, lying there scratching his itching wounds when God was busy torturing him just to play with him to see if he had faith. Jobho makes you call out to heaven even though you know God is occupied with better things and will not even look your way. Jobho makes you point your forefinger to the sky and sing at the top of your voice. We itch and we scratch and we point and we itch again and we fill the shack with song.
Then Stina reaches and takes Father’s hand and start moving it to the song, and Bastard moves the other hand. I reach out and touch him too because I have never really touched him ever since he came and this is what I must do now because how will it look when everybody is touching him and I am not? We all look at one another and smile-sing because we are touching him, just touching him all over like he is a beautiful plaything we have just rescued from the trash. He feels like dry wood in my hands, but there is a strange light in his sunken eyes, like he has swallowed the sun.”

That passage ripped my heart out.

Every once in a while Darling will break into our attention with “This is real” or ”Is this even real?” She captures that sense of incredulity we experience when life starts to feel a little ludicrous and outside our control. In the last half of the novel she is a teenaged high-schooler in Detroit, Michigan (Destroyedmichigan). Her outsider status gives her the requisite distance for maximum observation but she retains her need for community. She is continually questioned about, and always questioning, “home.”

This is an exceptional debut and NoViolet Bulawayo has created a fictional world that stuns as it captivates. I remember thinking that Bulawayo and Jesmyn Ward are sisters of the pen, for both have the ability to flay open the skin to get to the “real.” This is a bravura performance. I do wonder, however, if such a performance can be replicated.